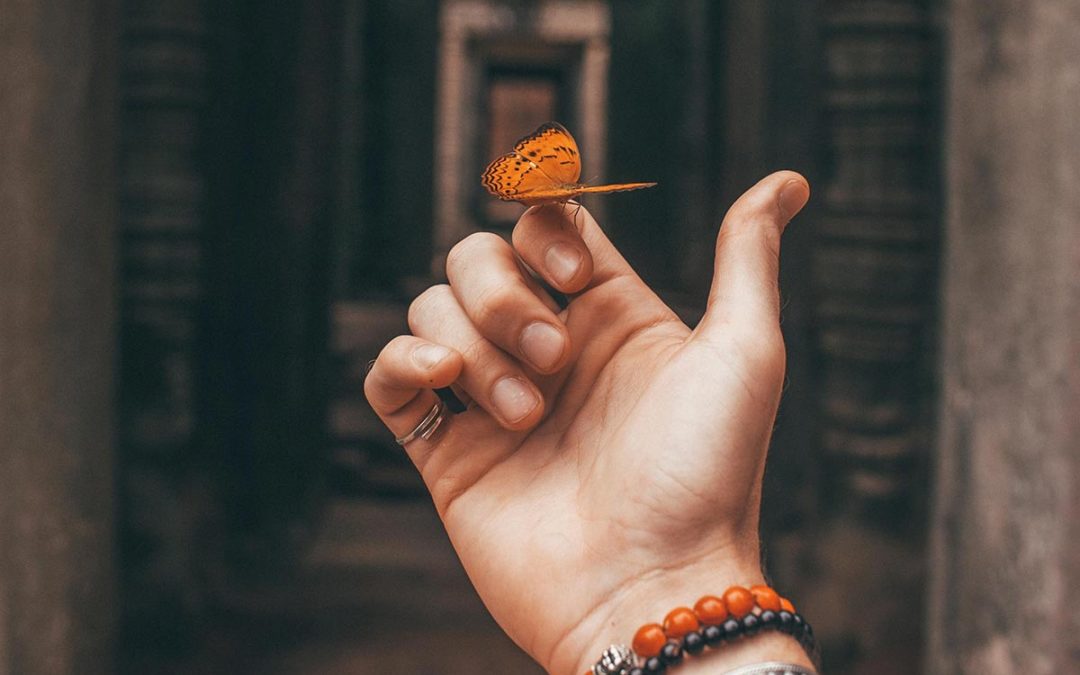 Becoming one with our surroundings can be done by transcending the restrictive power of language.

Most of our engagements and interactions with the world happen in a context of seperateness. On one side, there is the ‘I’, and on the other side a recognition of ‘them’ or ‘that’. Although human experience of the external world is varied and changeable, there are seldom words to describe experiences of ‘oneness’. This is partly because language is constructed to make us understand our experiences as separate from us. As Joyce Contrucci, author of Rape of the Wild (The Women’s Press) states: “Man named himself by an act of separation from (and power over) nature and animals.” On acquiring a language, one acquires the mental dispositions implicit in it and so we are automatically tuned into a consciousness of separation. In some languages, such as those spoken by the Eskimo and American Indians, there are words that describe the quality of an experience. These languages are called holophrastic or polysynthetic, where many of the elements of a sentence or phrase are combined into one utterance and do not exist separately. ’Merwerksergerh’, for example, is a word which expresses an aspect of the complex living relationship between the native American and nature. When describing a mountain an old Indian woman said: “You come upon a place you’ve never seen before, and it has awesome beauty, everything above you, below you, around you, is so pure – that is the beauty we call merwerksergerh, and the pure person experiencing it is also merwerksergerh.”  Contrucci explains that these types of words are only possible in societies where the sense of ‘we’ is greater than the sum of individual ‘I’s’. What is being seen is not evaluated as a separate object but is one with the person who experiences it. In other words, there is no ‘I’ distinct from the pure, awesome beauty of the place. English syntax requires an agent acting upon an object and giving it value. It requires the object to be situated with respect to the agent. In this way the object is always circumstantial, literally meaning that it ‘stands around’ the agent and is separated from it by a number of parts of speech like above, below, around you.

Rudolph Steiner,father of the anthroposophical movement, spoke about knowing the world in a different way. This involves learning to observe the world actively rather than assuming that the senses are merely passive receptors of our surroundings.

Steiner describes twelve senses rather than the usual five or seven – the senses of touch, life, movement, balance, smell, taste, sight, warmth, hearing, speech, thinking and the sense of ‘I’. In order to transcend the restrictions posed by language and to react in a more complete and holistic way with our surroundings he suggests practicing honing in on one of the senses. Naturally, the intellect always combines all the senses, and it takes some concentration to ‘suggest away’ the others. For example, when giving attention to the sense of touch, you find there is a very active side to this feeling. With the sense of touch, we feel or connect with the world. We discover a boundary, a separation. We discover where we end and something else begins, we see that things are different from our body and so we discover ourselves. But there is an inconsistency to the sense of touch. Although one can feel, for example, that a tree trunk is hard one can also feel its enormity and beauty. Alternately while feeling excluded from the outside world (being distinct from what we are touching) when focusing on touch we are also brought into intimacy with the world. To go deeper into the intimacy requires taking the impression of sensing and keeping it vitally alive. This requires that the heart travel through the sense of touch, adding love. When this happens the tree is transformed, not just for the one touching it, but in itself. Conscious projection brings the heart into the tree. Robert Sardello author of Facing the World with Soul (Lindisfarne Press) explains: “We cannot say we have just added something subjective or projected something onto the tree that is not there, but rather that, through touch, we have united with the tree, discovering more of what is actually there. This way of relating through the heart is the difference between knowing for oneself and knowing it in itself, realizing that we are an aspect of everything in the world, so that through this mode of knowing the things of the world, we also know ourselves.”